Who Are You? First, Second and Third Tier Subcontractors

“Who Are You?” by Pete Townsend and “The Who”, what does this have to do with contractors, sub contractors, factoring and Construction Finance?  I was on a job site the other day talking to one of my clients and I was trying to share my information with another client.  He was a dirt and site prep guy that had half a million dollars in equipment.  Trac hoe, backhoes, bulldozers, drop trailers to pull his equipment.  I asked him, “who all are you working for on this project?”  He said, “John, I dig dirt.  All I know is that they’re going to pay me on Friday.”

So ‘Who Are You?’ as a sub contractor?  Look at the photo below to see the ‘typical contracting project.’ 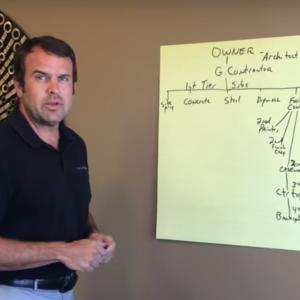 Typically in a construction project, there is an owner.  He or she decides to start a project.  So, he hires an architect.  The architect usually doesn’t pay anyone outside his or her office.  The owner and the architect decide on a good plan and choose a general contractor.  The general contractor bids the project at an acceptable price.  He agrees to hire sub contractors, buy materials to get the project done.

Lets single out the finish contractor.  That’s what I did many years go.  I had around 15 finish carpenters that did a variety of finish work.  Painters, mill workers, trim work etc.  Let’s say you were hired as the finish contractor as a ‘first tier sub’.  You bid the painting, trim carpentry, mill work, countertops and even backsplashes.  You are going to be in charge of all that.  You decide to hire a paint crew that’s not one of your employees.  That paint crew become the ‘second tier sub’.  You subbed out the painting portion of your bid.  You also hired a finish carpentry crew outside your own employees.  And you even hired a cabinet company and millwork crew.  All these sub contractors are second tier sub contractors.

The backsplash sub is now our ‘fourth tier sub’.

It is so important for you to know what was agreed upon by the owner and general contractor.  The general contractor probably agreed to have the finish work completed by a certain date.  That information is extremely important for you to know.  These terms and agreements will trickle down to you.  As a first tier sub, these terms and conditions will be very apparent to you.  What deadlines, materials etc. are expected from you.  However, the second, third and fourth tier sub contractor may not know what the first tier and general contractor signed in their contracts.  Many times they don’t ask to see the contracts.

So, if you are wanting to take on bigger projects and bid larger contracts it is extremely important to know where you fall in the tiers of the overall project.  ‘Who Are You’ in a large project is very important when you need to be certain that you will be paid in full at the end of the project.

My husband John Sawyer and I have 8 children and run an amazing business, Construction Finance. We have been married 23 years and are busy looking for new construction clients all while taxiing our busy children to activities.