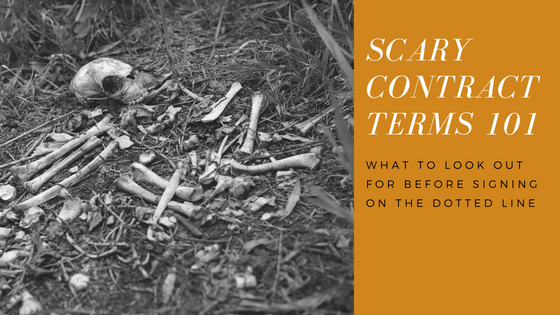 As I’ve mentioned before, not all scary contract terms look equally scary.

An indemnification clause can stretch out for half a page, but depending on wording, it might not actually be scary at all.  Liquidated damages, on the other hand, might consist of two sentences, but can easily cost you hundreds of thousands of dollars.

Like liquidated damages, another scary contract clause that’s really easy to glance over is the one regarding attorney fees.

More specifically, in the event of dispute, who is required to pay whose?

Does each person pay for their own lawyer?  Is the losing party going to be responsible for all legal fees incurred by both sides? Is there a venue provision in the contract, saying where the matter will be heard, and if so, does this impact you? (On this last question, obviously, the answer is, ‘it depends’. If you live in Dallas, and you’re working for a Dallas GC, doing a job in Dallas, and the venue provision says that all disputes will be heard in a Dallas, that’s probably not a big deal.  On the other hand, if you’re living in Dallas, and doing that job in Dallas, but the GC is out of Boston, venue provisions could get tricky.  If the contract requires disputes to be litigated in Boston, that’s going make taking them to court very expensive, and from a practical perspective, may mean that you opt against litigation.)

Unlike some contract provisions, attorney fees normally won’t be a deal breaker.  However, it is one of those paragraphs in a contract that you should take the three minutes to read.  It’s far better to know what you’re up against now, rather than to wait until after the project has already fallen apart, and you have three weeks left on your statute of limitations to file a complaint with the courts.