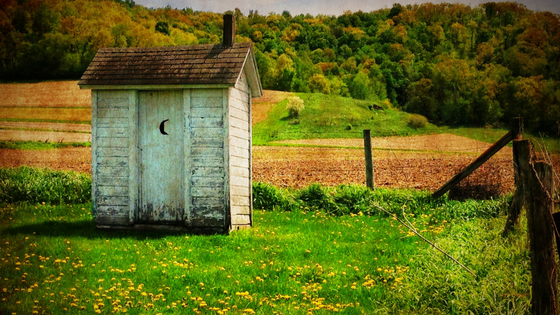 One strange thing about my job is that whatever is happening tends to realllllly be happening.

I’ve had Dan Days, where every person I talk to ends up being named Dan.  I’ve had Bob Days, which are like Dan Days, but with Bobs. I’ve had lien rights days, where I spend so much time dealing with weird lien issues that I feel like I should just go out and open a practice that specializes in nothing but liens.

And, I’ve had plumbing days.  Days where I find myself learning entirely more about the plumbing business than I ever set out to learn.

Recently, we had a plumbing day.

Midway through my zillionth hour of hearing about toilet storage issues and impossible engineering specs, I got to thinking:  Plumbing is nice.  Like, really nice.

And, around here, it’s actually a pretty new thing.

My grandparents, after all, grew up with outhouses.  And we were fancy folk.  The people who weren’t my grandparents?  It was going to be awhile before they got an indoor commode.

In other places, indoor plumbing has a little bit longer of a history.  One of the first buildings built with an indoor restroom was the Tremont Hotel in Boston.  Built in 1829, the four story luxury hotel featured no fewer than eight indoor bathrooms, all located on the ground floor.

By today’s standards, we expect nicer accommodations in places that rent by the hour, but for 1829, that sent shockwaves through the world.

Five years later, The Astor House in New York put the little ol’ Tremont to shame–this six story hotel featured 17 bathrooms…and not just on the first floor.  These 17 bathrooms served 300 guest rooms; a bathroom to guest ratio that was quite luxurious for the time.

As for bringing indoor plumbing to the masses, there is no single year that a person can pinpoint–like any luxury, bathrooms in the house had a bit of a trickle down effect, making their way from something that only the rich people in the cities could enjoy, to a nice extra that the middle class could obtain (i.e. the stainless steel and granite of 1918), to something that we all take for granted.

One time span that does pretty well encapsulate the spread is 1929-1954.  During this period, sales for plumbing distributors increased by 367%.  It was during this period that having an indoor toilet went from something that you treated yourself to for making Junior Executive VP at the bank to a thing that even people in the slums started expecting. It was also during this time indoor plumbing spread through countryside, bringing those newfangled urban luxuries to those who lived well outside the city limits of St. Louis or Memphis, much less New York or Boston.

So, the next time that you’re dealing with A Plumbing Day, just be glad it’s no longer 1928.