Staying Mindful of Risk Tolerance In Your Company Culture 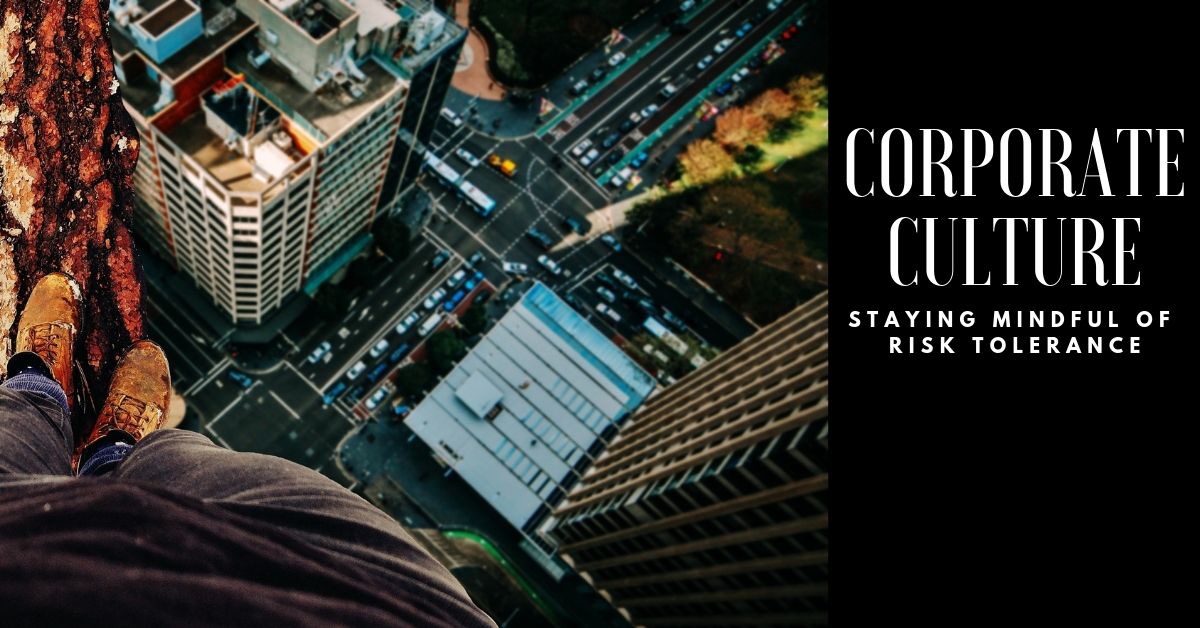 Typically, this blog focuses on the issues of small businesses, and how to best manage those.  After all, that’s who most of our clients are.

However, as a company begins to grow, new issues start to arise, and one of those is the company’s culture of risk tolerance; specifically the degree of risk acceptance amongst management.

For most companies just starting out, this isn’t really an issue: You have one manager. The owner.  The company’s risk tolerance is determined by that one person, and odds are, if you’re reading this, you’re the owner.

You’re taking the degree of risk that best suits your current needs, and since you’re the one calling all of the shots, it’s pretty easy to change direction if need be.

If those risks are managed well, things begin to grow, and eventually, there become too many key decisions for one person to handle.  At this point, project managers, purchasing managers, and accounting managers all begin to enter the picture, and with them comes a new level of complexity.

To put it simply, some people are more risk averse than others.

Moreover, not all competent managers are going to have the same appetite for risk.

I’ve seen some very bright, talented people who always push the envelope.  They’ll bid jobs they don’t quite have the resources to do, they’ll undercut the competition even when doing so leaves little profit margin, and they generally live by the motto that it’s easier to ask forgiveness than permission.

Some of these risks will pan out, some won’t, and these people are willing to accept a few disasters along the way so long as the potential payoff is greater.

Other people are the opposite.

They only bid when they’re 100% sure they can complete the project without issue.  By making sure there’s sufficient profit margin, their bids aren’t always competitive.  The timelines they promise are realistic, but not great for ‘wow-ing’ customers.

In short, they don’t hit as many home runs, but if they’re good at what they do, they can chart a nice, safe course for the company.

As more and more decision makers get added to the mix, it becomes crucial to consider each manager’s appetite for risk, and what this potentially means for the company.

Too often, one of two things can happen: The first scenario is one in which the company owner keeps hiring and promoting clones of his or herself.

Under this scenario, one risk taker multiplies into five, and it becomes harder and harder to juggle all of those swords thrown into the air.  Similarly, the risk-averse owner starts to mistake neuroticism for greatness, and ends up creating an echo chamber full of people who all ultimately decide that maybe the safest course of action would be to not do anything at all.

The second scenario is what happens when you have an overly self-aware owner: In an effort to compensate their own weaknesses, they seek to bring a contrasting voice to the table.

For the first one or two hires, this can work pretty well.

However, as the chain of management grows larger and more complex, and this same process is repeated over and over, a similar echo chamber begins to form.

Worse, this is now an echo chamber that goes against the owner’s very nature.

It’s because of this that as a company grows, there needs to be a plan in place.

Simply recognizing the need for a foreman or purchasing manager isn’t enough.  There needs to be some serious thought with regards to the company’s overall goals, the desired appetite for risk across the company.

Unfortunately, there is no simple answer for this: Not every company has the same needs and goals. The culture of risk tolerance that works for one company won’t work for another.

Moreover, these needs and goals may change with time: What works when the company is two years old and doing $4MM a year in business may not be the best approach two decades later, when the annual revenue is closer to $40MM.

However, as the company owner, it’s essential that you be aware of this dynamic, and to monitor the culture of risk within your company.  As positions are added and circumstances change, spend the time to re-evaluate the overall picture, and take the steps needed to ensure that your company continues to head in the right direction.